This is an overview of how to compile programs on Unix machines. The examples are specific to the C compiler but can be applied to all Unix compilers. Note that compilers are available only on rintintin, rastro, and eddie--not on the information-only machines like spot. To find out which compilers are on a particular machine, type:

This command will produce a list of all the compilers that have manual pages and will indicate which sections address compilers. For example, on spot the output looks like this: 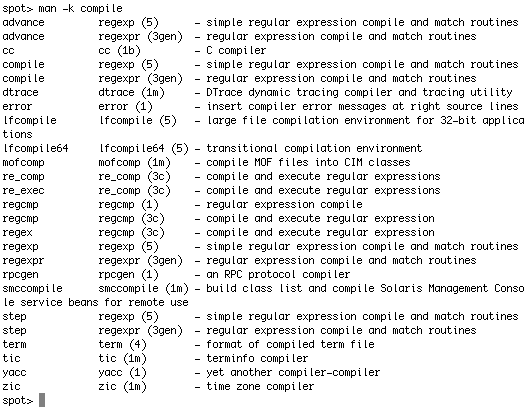 To find out more about a specific compiler, for example, the Zic time zone compiler, type:

The basic form of a compile command line is:

Unix compilers have many options; here is a list of some of the most commonly used and helpful ones.

-o fname
Create an executable named fname instead of a.out.

-g
Have the compiler produce symbol table information for the debugger dbx(1).

-Dname
Define name for the macro preprocessor as if it was done with a #define statement.

-Idir_name
Search dir_name for #include files before searching in the standard directory, /usr/include.

Search library libname.a. Libraries are searched as they are found on the command line so placement is important. Common libraries used are:

The following example compilation line compiles the C source file myprog.c with default optimization and symbol table information into the executable file myprog. The name OIT is defined to the C macro preprocessor and during the link phase the Math Library (/usr/lib/libm.a) is searched.

Now link the object files together into an executable named myprog:

Several programs can be helpful in developing programs on Unix machines. Here is a short description of some of them; look at individual man pages for more information.